Self-published and published author, Hamilton Wende was the guest of the Writers 2000 group on Saturday 10 September. A massive thanks to him and Meggan for organising the event.

Hamilton Wende is a freelance writer and television producer based in Johannesburg.

His articles have appeared in many international and South African newspapers, magazines and websites.

In television, he has worked for a number of international networks including National Geographic, CNN, BBC, NBC, Al Jazeera English, ZDF, ARD and a number of others. 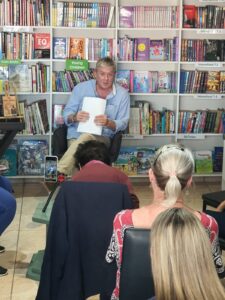 He has written ten books: His latest thriller, Red Air, reflects his experiences with the US Marines in Afghanistan.

His recent children’s books Arabella, the Secret King and the Amulet from Timbuktu and Arabella, The Moon and a Magic Mongongo Nut – are charming tweenie thrillers about Arabella and the magic mongongo nut that changes her life and involves her in a war between the hadedas and the insects in her garden in Johannesburg.

If you would like to know more about self-publishing services on offer from Beyond The Vale Publishing, contact us here.